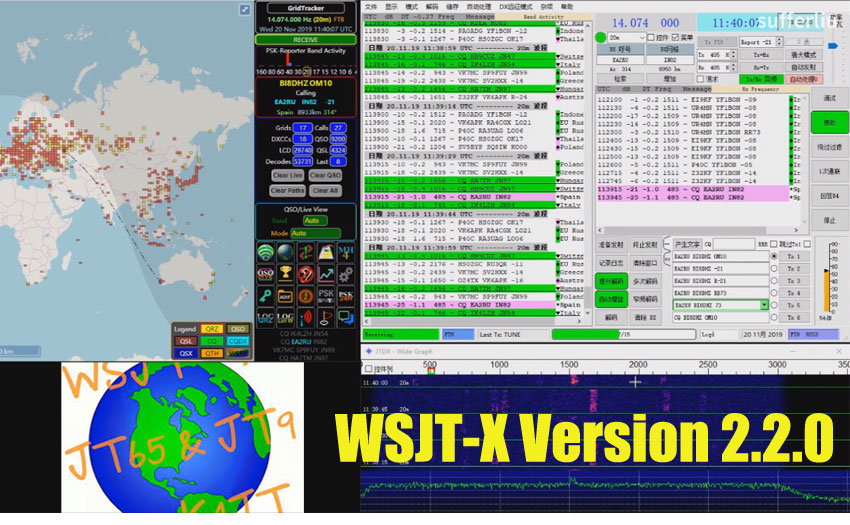 Taylor noted that even with their shorter transmit-receive sequences, FT4 and FT8 are considered “slow modes,” because their message frames are sent only once per transmission. “All fast modes in WSJT-X send their message frames repeatedly, as many times as will fit into the [transmit] sequence length,” he explained.

Compared with FT8, FT4 is 3.5 dB less sensitive and requires 1.6 times the bandwidth, but it offers the potential for twice the contact rate.

New in WSJT-X version 2.2.0: FT8 decoding is now spread over three intervals, the first starting at 11.8 seconds into a receive sequence and typically yielding around 85% of the possible decodes. This means users see most decodes much sooner than with previous versions. A second processing step starts at 13.5 seconds, and a third at 14.7 seconds.

“Overall decoding yield on crowded bands is improved by 10% or more,” Taylor said.

Other changes: Signal-to-noise (SNR) estimates no longer saturate at +20 dB, and large signals in the passband no longer cause the SNR of weaker signals to be biased low. Times written to the ALL.TXT cumulative journal file are now correct, even when decoding occurs after the T/R sequence boundary.

Six Meters Recently Running Hot
How to judge the quality of an antenna?

by Vivian
Add Amateur Radio to Your Disaster Toolkit

by Yolanda
2021 China Emergency UAV Service and Technology In ...