When she turned 80, Anna Brummer, N2FER, of Fort Edward, New York, predicted she would live to be 100. On September 27, she topped her own forecast by 5 years, as she celebrated her birthday at the Fort Hudson Nursing Center, surrounded by family and friends. The only thing she wanted was a drink of Scotch whiskey, and the nursing home obliged, along with a slice of cake. Unit Manager Donna Hopkins told Post Star newspaper reporter Gretta Hochsprung that she didn’t attempt to put 105 candles on Brummer’s cake because it would have been a fire hazard. Brummer told Hochsprung that the secret to longevity is being nice to people.

"Keeps you young when everything's going smooth," she told the reporter. 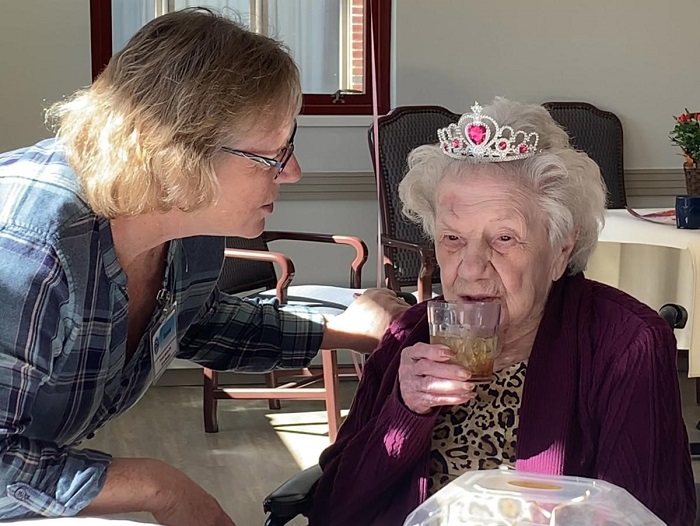 Anna Brummer was a latecomer to Amateur Radio. In 1984, her son Richard, K2JQ (ex-K2REB), got his mom and his dad, Edwin, interested in Amateur Radio, and Anna obtained her Technician license when she was 69 years old. Edwin Brummer, who died in 1996, was N2FEQ, and held a Tech Plus ticket. They were married for 56 years.

Anna Brummer was born in the Bronx and went on to work as a sales clerk at Kresge’s, making $12 a week. When Kresge’s folded, she became a school cafeteria worker in Massapequa on Long Island.

Richard Brummer, who described his mother as “very loving,” said she definitely has a will to live.

No official records are kept, but Anna Brummer is among a small circle of centenarian radio amateurs in the US and may be the oldest woman now holding a license. Cliff Kayhart, W4KKP, of South Carolina, appears to be the oldest active US radio amateur at 107. Arlene “Buddy” Clay, KL7OT, lived to be 103.