The Ailunce HD1 is a dual band amateur radio that supports both analog and DMR Tier 2 protocol. Opening the package, you receive the radio, battery, antenna, belt clip and drop in charger. The programming cable is sold separately, but it is included as part of a bundle when you order on the Retevis website. The cable connects to the multi-pin speaker mic connector and while the connection looks similar, it is not compatible with other radios, like the RT82.

Prominent features of the radio include

If you run down the list of main features you’ll see quite a bit that are common with most DMR radios on the market. But as I said, the HD1 is designed for amateur radio use, so I’m going to pull out the few of the features that make the HD1 unique and really make it an amateur focused handheld radio. 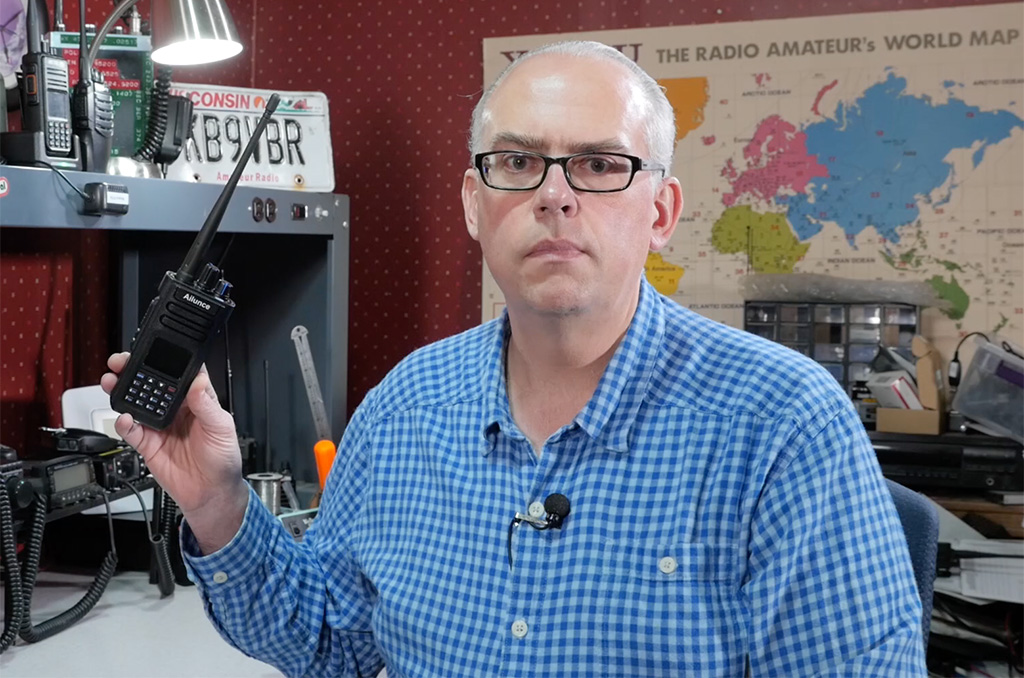 Looking at the build of the radio, the HD1 is larger than most Chinese DMR radios, with a length of almost 6 inches and 2.5 inches wide. It’s a bit heavier too, but size and weight isn’t overwhelming and feels well balanced in the hand. The radio has two knobs on the top, one as power and volume and the other as a channel selector. On the side is a push to talk button and two programmable buttons. the other side has a connector for an optional speaker mic. The HD1 has an IP67 designation which means that it is protected from dust and can withstand water immersion.  so don’t be worried about getting this handheld radio wet. 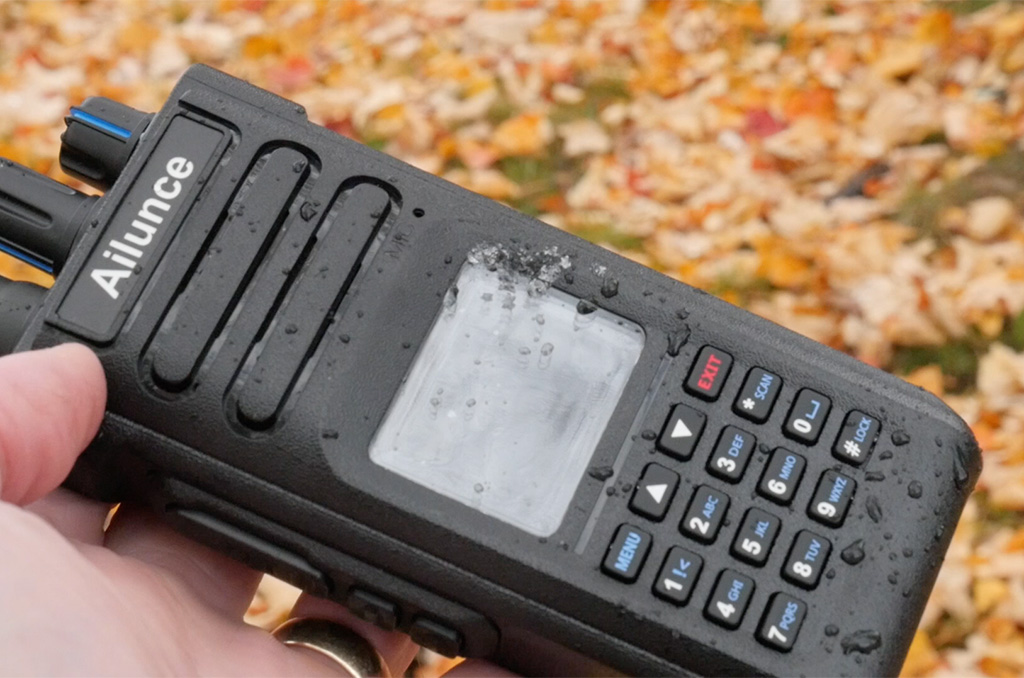 Top of the list of unique features is the transmit power. The HD1 can transmit up to 10 watts on VHF and 8 watts on UHF. Medium power drops to 5 and there’s a low 1 watt power mode. Really, the difference between 10 and 5 watts is 3db or about 1.5 S unit, so that extra boost of power could be handy in the fringe areas. But leaving it on medium power will conserve your power, giving you more life out of the hefty 3200 MaH Lithium Ion Battery.

When you first turn on the unprogrammed radio you are greeted with the VFO as the radio is in frequency mode. Yes, the HD-1 has a VFO and is fully programmable from the front panel. While I wouldn’t necessarily want to program DMR channels into the radio this way, you do have the ability to be frequency agile and change to any VHF or UHF frequency on the fly. That’s a nice feature especially if someone tells you to go to a channel you don’t have programmed in.

Maybe if I wasn’t used to programming other DMR radios, this program would feel more intuitive. But once I got over the curve, it wasn’t too difficult. There are two big differences between programming the HD1 and another radio like the RT82 or a TYT MD380 at that matter. First, there are two contacts windows. The first is address book contacts and the second priority contacts. The address book contacts hold up to 100,000 private call contacts. You can import DMR IDs and callsigns from the DMR database so that information is automatically displayed on the screen. Separate from that are your priority contacts. These are your group call tags for your various talk groups. You can also add private calls to the priority call window if there are individuals you want to keep separate from the address book contacts.

The next big difference is the channel window. The HD1 will hold up to 3,000 channels and this window is displayed in spreadsheet format. To edit a channel you can click on the field and make changes or click on icon at the end of the line to open an edit box. Adding a channel is a bit convoluted, you need to first put a frequency in the Receive field and then you can open the edit box to add the rest of the values. But the nice thing about the channel window is you can add, edit, insert and move around channels; so it is quite easy to reorder channels in the radio.

Finally, there is a radio ID window that will hold up to 32 different DMR IDs. I like this feature as we have multiple hams in my family, so its easy to hand off a radio to my wife or daughter and with a few button clicks it becomes their radio.

Operation of the Ailunce HD1 is pretty straightforward. The volume knob is also the power switch and the selector knob can be used to change the channel or scroll through the menu items. At the radio’s default display position, you can toggle between frequency mode and channel mode by pressing the Exit button. Pressing the exit again will get you back into channel mode. Pressing the menu button gets you to the various functions and features of the radio. To scan, press the scan button on the keypad and to lock the keypad, press the lock button. Unlocking is done by pressing the lock button again.

One nice feature about the HD1 is that you can operate the menu while receiving a transmission. Many DMR radios will lock function until the transmission is ended, but with the HD1 you can preempt the transmission by pressing the menu button or turning the selector dial.

The two side buttons under the push to talk are programmable in the software. In their default setting they will toggle the FM radio or the scan function on the radio. 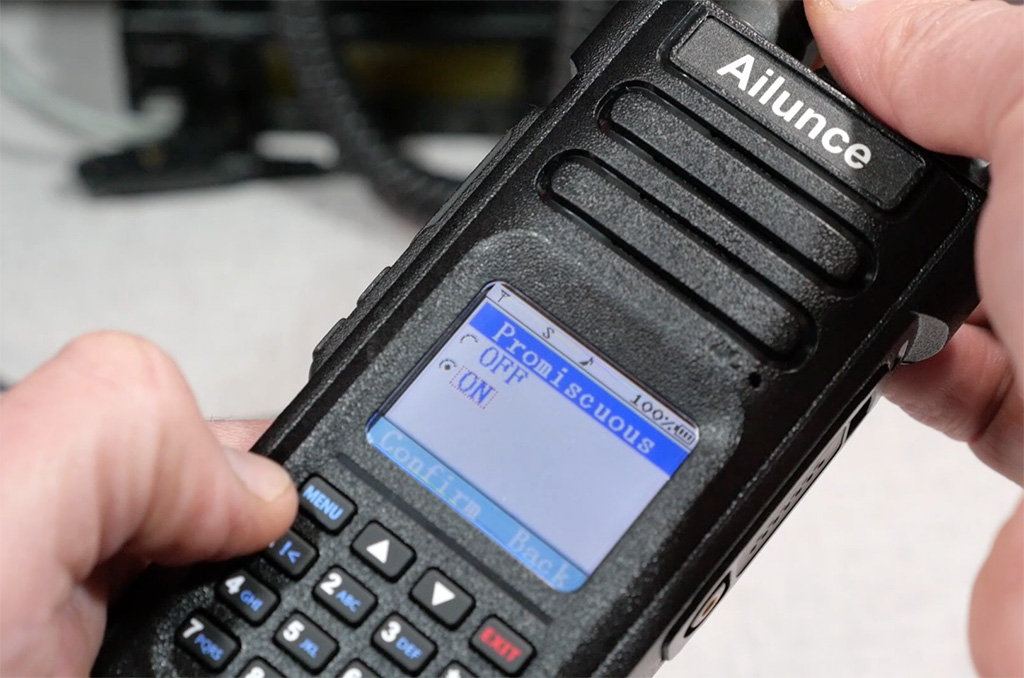 One operation function that sets the HD1 apart from other DMR radios is its Promiscuous Mode. When Promiscuous Mode is enabled, you have the ability to listen to all talk groups on a repeater’s time slot and color code. So if a repeater time slot has multiple talk groups, with promiscuous mode you can listen to them all. Its a nice feature and many other DMR radios can do it, but the HD1 takes things one step further by letting you transmit back to a received talk group. The way that works is when you hear a transmission on a particular talk group that you wish to respond to: you press menu, go to Band A, select contacts and choose that talk group. You will then be keyed to transmit on that talk group. Now you won’t need to create a channel for every talk group; just create channels for time slot 1 and time slot 2 and set up the talkgroups in your contact list. 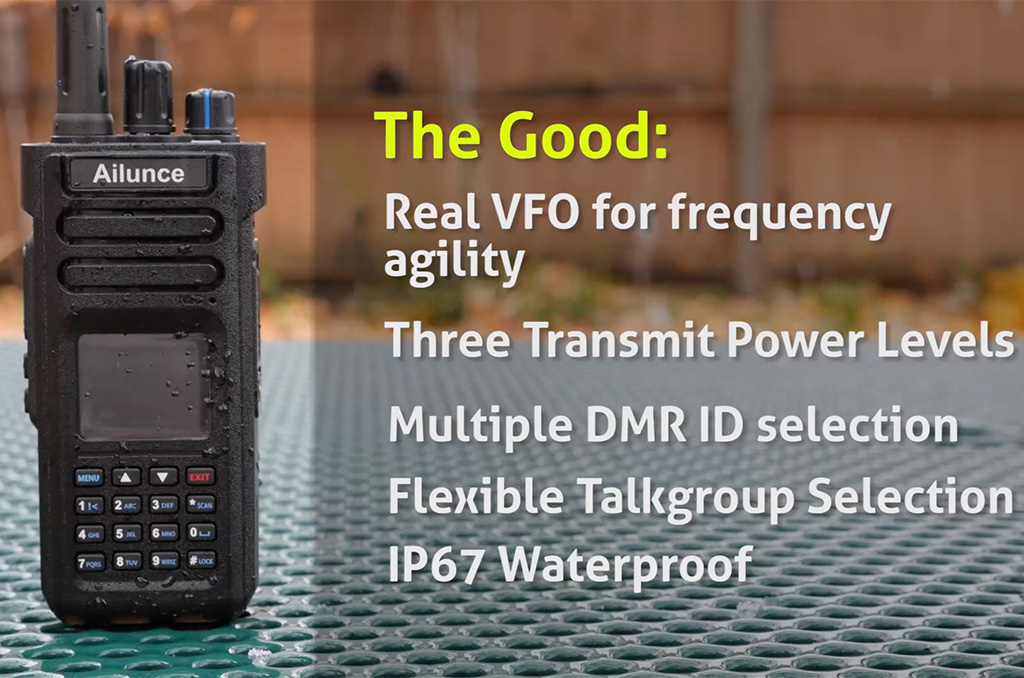 So what’s good and bad about the Ailunce HD1. First off, I like the addition of a real VFO for frequency agility. Three transmit power levels, Multiple DMR ID selection, Flexible talk group selection, and the IP67 waterproof designation

Things that I find frustrating with the HD1 are nonstandard programming software. I wish these applications could share a similar look and feel between models to make programming easier. Along with that a lack of import from other Retevis radios. Zone selection is buried in a menu. I wish selecting zones was front and center in the menu or on the keypad.

I must admit, of all the DMR radios that I’ve tested and reviewed, this one is the best so far.   I love the loud audio that this radio puts out. Ten watts of transmit power isn’t a big deal for me, I’d rather dial back the transmit to 5 watts and enjoy longer battery life. All in all, it’s a solid rig and probably one the best choices currently on the market for a DMR handheld radio.

Do you have any questions about the Ailunce HD1? Is there a feature that I missed? Please leave them in the comments below. This is the first in a two part video and in the followup I’ll answer your questions and look at some of the practical uses of the Ailunce HD1. Thanks to Retevis for supplying the radio, you can check it out at www.ailunce.com

Here is the review radio:

by Vivian
Ailunce HD1 use in fire emergency

by Vivian
Very nice feedback of Ailunce HD1 use in Emergency ...

by aliunce
The Depth Look about HF SDR Radio Ailunce HS1 by M ...

Can you enter a group call ID from the keypad? I have seen radios that only allow adding private call ID's from the keypad like the Baeofeng DM-1701, and other radios allow you to enter group ID's like the Anytone 868/878

HD1 support to add group call id, private call id, and all call. you can select it via the type.