Cross band repeater function as a very useful feature be used on some hand held radios, This function is very useful to support field operations, especially handheld radio operations, in remote locations that don’t have access to high level repeater systems. A crossband system has the ability to work on different frequency bands, as well as frequencies within the same band. The repeater can receive from a user, link to another repeater and transmit to a different user, all on different frequency bands or frequencies within the same band. but do you know how does it works?

Ham radio VHF/UHF crossband repeater operation is a common use for amateur operators.and it is an effective way to extend the range of your handheld radio. 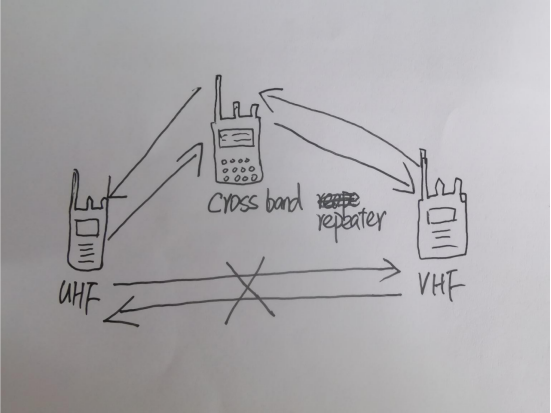 Normally Cross-band repeat function will be taken by dual-band/dual monitor mobile radio and a dual-band or UHF/VHF capable handheld radio. Cross-band repeat only works with a two simplex frequencies (one UHF & one VHF) or a UHF simplex and a VHF repeater pair frequency.  You will use the UHF channel on your handheld to communicate to the dual-band mobile. The cross band repeater capable radio then takes that signal and simultaneously transmits it on a VHF frequency (either VHF simplex or repeater). When the VHF station or repeater makes a transmission, the cross band repeater function radio receives and retransmits the signal on the UHF simplex frequency. This is the cross-band repeat process.

Another important point is The receive sides of both VHF and UHF on the cross-band should have CTCSS (PL) tone encode set to minimize the chance of false triggering by other signals.

What to Do When 8020 Error Message Occurs While Programming
What is different between simplex,full duplex and half duplex

by Yolanda
How to Add a New DMR Channel without Computer on A ...

by Yolanda
How to Add a New Analog Channel without Computer o ...

by Yamy
How to set scan on Retevis RT82

by Yolanda
How to Use the Radio SQL Function?

by Vivian
The Advantages of Digital Filters

by Vivian
Hams Save Lives at Critical Times from The Two Eme ...