Learn HD1 every day: Ailunce HD1 Cant Listen to dPMR446 in the UK 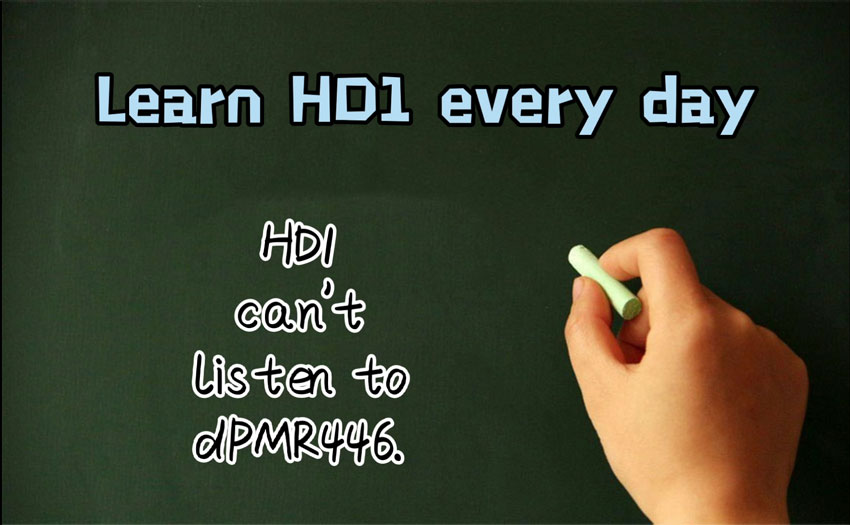 Q: Has anyone used the HD1 to listen to dPMR446 in the UK, interested in what settings to use? As dPMR446 is Teir1, is assume is a simple TS1 and MODE Simplex, or is it mode "Double Slot".  I don't has access to a dPMR446 unit to test against.

A: dPMR is a different protocol than DMR. so not able to listen. One is TDMA and the other FDMA.

On radiosification website, there have a blog explained dPMR and DMR Tiers and modes.  Let's learn it today.

The difference between dPMR and DMR?

dPMR and DMR are two completely separate and different standards but many people are confused by them because of the terminology used around them. In this post I will explain the terminology and hopefully stop any further confusion. Both of them are digital standards, just like P25, NXDN, D-STAR, TETRA, TETRAPOL, OpenSky.

The tiers are not related between different standards. Do not try to equate tier 2 DMR to tier 2 dPMR.

Licence free for use in the PMR446 band only. Direct mode (radio to radio, also called simplex) communication (meaning no repeaters), limited to 0.5W and with a fixed antenna. Radios are band limited to PMR446 frequencies only. May only be used in countries where PMR446 is legal.

Do not confuse Tier 1 to mean any radio which only does simplex. It does not! A Tier 1 DMR radio is specifically made for PMR446.

Uses 12.5KHz bandwidth channels just like tier 2 and tier 3. DMR can never have any other bandwidth. Tier 1 radios may use continuous transmission mode, which means that the radio does not pulse on and off like with tier 2 and 3 (i.e. not TDMA), but they do not have to use continuous transmission mode. There are radios that do use TDMA in tier 1 DMR because it saves battery since the transmitter is only on half the time.

Direct mode (simplex mode) and repeater operation on licensed frequencies. You need to obtain a licence to use this. It can be an amateur radio licence or a business radio licence. Can be used in any country where a licence is granted by the local regulator. Radios do not have a power limit and may have removable antennas. Radios use TDMA which stands for time division multiple access. This allows DMR to achieve the same spectral efficiency as dPMR (6.25KHz equivalent) because the 12.5KHz channel is divided by time into two alternating slots. The radios take it in turn to use these slots so essentially each radio is using half of a 12.5KHz channel. The benefit of this is that one repeater can support two voice calls at the same time.

Like tier 2, but with the addition of trunking. This is DMR standard trunking and not to be confused with proprietary add ons from manufacturers that let their radios do trunking with tier 2. They are not part of the DMR standard and won't interoperate with other manufacturers radios. The idea behind using standards is that you can buy radios and network infrastructure from different manufacturers and have them work together. It is usually better in the long run to stick to standards based technology.

dPMR uses 6.25KHz bandwidth channels for all modes/tiers. FDMA, which stands for frequency division multiple access, is used, so each user occupies one full 6.25KHz channel when talking on the radio.

dPMR for use on the PMR446 licence free band. Limited to PMR446 frequencies only, with 0.5W maximum output power and a fixed antenna. Not the same as DMR tier 1. Not compatible either. May only be used in countries where PMR446 is legal. Direct mode only, so no repeaters.

Normal licensed dPMR. Licence is required. Can be used in any country where a licence is granted by the local regulator. No power limits on radios, no band limits, no fixed antenna required.
Split into three modes:
Mode 1
Radio to radio. Similar to Tier 1 dPMR, but with no power limit, no band limit, and no fixed antenna.
Mode 2
Use of conventional repeaters. This is just a normal digital repeater that receives the signal and transmits it back out. Comparable to DMR Tier 2, but not compatible.
Mode 3
Full trunking. Comparable to DMR Tier 3, but not compatible.

by Yamy
Retevis RA86 is coming